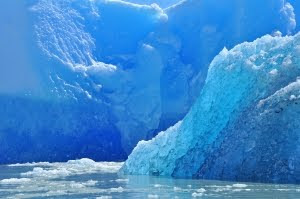 When the Arctic started to change shape, Russian explorers managed to navigate a submarine 4,200m below the North Pole where they planted their countries National Flag, reinforcing Moscow's claims to the Arctic. In an angry retort Canadian Foreign Minister Peter MacKay told Canadian TV "This isn't the 15th Century. You can't go around the world and just plant flags and say "We're claiming this territory"."Why are people getting their knickers in a twist over the planets most inhospitable territory? Because buried just below is an estimated quarter of the planets oil and gas reserves.

Several countries with territories bordering the Arctic, including America, Russia, Canada and Denmark, who have sovereignty over Greenland - have launched competing claims to the region. And so in wades the EU.

Current UN laws place territorial waters 200 nautical miles beyond their land borders. The North Pole is currently not regarded as part of any single country's territory, although the Russians claim Geologically, the North Pole is an extension of the Russian Coastal shelf, and is therefore part of their territory. The US and Canada are locking horns over the North West Passage, Russia and Norway are caught in a tussle over the Barents Sea and Canada are also trying to see off Danish claims to a small island just off Greenland.

Denmark, an EU member state since the start of Britain's membership back in the seventies, is Europe's best claim to the territory alongside Iceland, who are looking to join the Union next year and will no doubt prove very popular if she manages to wield any power up North.
Recent talk has seen the five key competitors for a slice of the ice talk about carving up the region based upon geography and size. Although I can't see America or Russia looking to share. What does Europe want? Well the Commission has been very vocal in issues such as biodiversity and ecological protection, read here the EU's favourite guise for political blackmail. But just under the cover of Green Good Will lies the real reasons why the Arctic is so in demand, and why Europe are so keen to stop anybody barging in and taking what they want by warbling about melting ice caps and nature.

What I worry about is what this sort of posturing will do. Although nobody is coming out on the subject, there is a lot of side glancing, snooping and plain chauvenism when it comes to claming the pole. And we've seen many a time before in history where such posturing can lead.
It is for this reason I grilled Baroness Ashton, former Secretary for the CND during the Cold War, over whether her first hand experience of the Arms race has taught her nothing over this race for resources in the Ice War.

The point is, why are we even caught up ion all of this? Do we want to be part of a group sizing up to Russia and America over Arctic rights? Whether we do or not, the point is, again, that it is not you or I making that decision.

More ironic perhaps is the conjecture by the EU that Regional Fishing Rights have been extended to the Arctic while they stop and figure out what to do, meaning like a German laying his towel on the sunbed at daybreak, Brussels has already decided upon fish quotas for the area before being able to claim any rights.

The problem here is being part of a Union that has Foreign Affairs at all. Any action taken by the EU would only undermine NATO and the UN, two global organisations who are supposed to be the circus ringmasters when it comes to these kind of knotty disputes. Surely any interest from Brussels would only aggravate relations with America, whose new President seems to have forgotten International tact and historical allegiances in his recent neutrality over the Falklands, and would surely send the wrong sort of message to our biggest not-so-friendly neighbour Russia. Lord knows what sort of affect Moscow's old satellite states queuing up to join the EU gravy train is having on the aging superpower anyway. But if they start heckling her over territory she believes is rightfully hers, then you've read it here first: I predict a riot.

Hold on to your hats boys and girls because we have an unelected soviet sympathiser, guided by a Dane, heading up an External Action Service coordinating foreign policy that nobody wants on behalf of 27 nonethewiser European countries, looking hungrily at that big floating fridge on top of the world.