A Long Day's Journey Into Night and Bunny Boiling 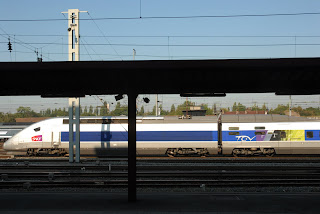 This morning I got into Parliament at 8:00am (GMT+1) which is pretty normal. The days are long and it's quite an intense week. After four days in Strasbourg I'll be glad to get home. MEPs from France and Belgium probably don't appreciate how fortunate they are to face a much smaller commute. It'll be more like Friday morning before I actually arrive back via the wonders of the TGV and Eurostar. At least travelling by train I can get on with a bit of work in relatively comfortable surroundings, make phone calls if need be, kick back and try to relax as the landscape rushes past. Not only would regular air travel do nothing for my carbon footprint, I am sure it would do nothing for the soul either. Train travel should be the obvious choice for getting from A to B. The first railways were laid in India in 1853. Now the trains transport 18 million people across the subcontinent a day. At the turn of the last century the Trans-Siberian railway was constructed. This amazing feat of engineering, almost six thousand miles long, cost Russia as much as Soviet involvement in WWI, and opened up travel for the first time for many people, from East to West and vice versa, without having to forego everyday comforts. A century on and the rail network in the UK is still lagging so incredibly far behind. Especially when you consider the MagLev in Shanghai, the Bullet in Japan...

"Come on guys it's home time"

I must admit I do think it's a ridiculous situation that everyone ups and leaves for Strasbourg one week a month. It's absolutely nuts when the hottest topic for discussion is climate change, and the key players are trying to thrash out sensible, achievable targets and objectives, when every three weeks, a huge chunk of EU staff all migrate South to Strasbourg by road, rail and air. It's a case of "do as I say" rather than "do as I do" when it comes to the EU. When I close my office door later today it will remain closed for a month - and the whole Parliament building will be evacuated, waiting for the next mass migration. You just could not make this up. It's a given that the MEPs travel from across the continent anyway, why make things even more complicated than they already are?

And on the subject of Carbon Footprints, I came across an EU funded initiative that may make our nation of animal lovers recoil. Stockholm is annually faced with a huge explosion in the population of rabbits. Many are the offspring of the domestic bunny which have over time escaped into the city and bred, well, like rabbits. Now they are said to be destroying the city's parks. Last year six thousand were culled. But what happened to the bodies? Not given to Felix or Whiskas, I assure you. This year the bodies are being frozen and transported one hundred and fifty miles to a Biofuel plant in Karlskoga, where they are boiled down and turned into central heating for the city's residents. That certainly puts a new take on the term bunny boiler!
Posted by John Bufton MEP at 11:51:00