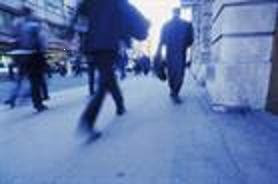 Yet again it's at the forefront of topical discussion. Well it's always been at the forefront of our discussion, yet like every other relevent political discourse, it has often been marginalised and the parties that comment on the issue are marginalised themselves. There has developed this tendency in recent years to confuse criticising immigration with a xenophobic attack. Even though at the moment everyone is blaming uncontrolled immigration in recent years for the rise in popularity of the BNP. Well instead of banging on about it, shouldn't we instead finally be acting on it?
Why has it escaped wide reportage that Britain is set to lose one of the last bastions of sovereignty and effectively relinquish control of its borders under a common EU asylum policy?

(Even if we try to avoid the EU's common immigration policy the Lisbon Treaty will see that we relinquish any say on the matter.)

The EU decided that the allocation of asylum seekers is to be based on the population of each member state. Great. This means Britain will have to take on proportionately more immigrants than other countries because we already have a very large population. Well Britain’s already oversized population is to a large part due to immigration to date.

This is a country that already has the same population as France, despite geographically being four times smaller. In effect - we are four times more crowded.


Rather than allowing us to state the bleedin' obvious – that we are speeding headlong towards extreme over-capacity – this fact will now used as the main reason for us to have to take in more! It's like distributing food based on what your BMI is. Undernourished people would get a grain of rice, whereas those who are morbidly obese would get platefuls. The word is "nonsensical".

Britain is known all over the world. Our pop music, the English language, films, TV programmes and The Premier League. This makes us a highly desirable country to live in. You probably don't hear many people with aspirations of fleeing their countries saying "I know, I'll try to get to Lithuania" or "I hear Bulgaria would be a great place to live". Now I'm not saying these countries are unpopular or people wouldn't want to live there. It's more basic than that. They are not very well known.

Open border policy in Europe disregards the 1951 Convention of Refugees that states someone must claim asylum in the first safe country they arrive in. Funny then that lots seem to end up in the UK as if there is an Armada of ships queing outside our ports.

We have also received European migrants in their thousands and no doubt are set to receive even more as the EU considers more membership applications.

Sadly the immigration debate has now become related to matters of acceptance and to state the simple fact that the country is full to bursting is often translated into xenophobia.

Britain had good reasons to be one of only two EU members not to sign the 1990 Schengen Convention. (Some interesting arguments are laid out by Civitas)

We are an island, and by sheer logic, we have a limited capacity.
Posted by John Bufton MEP at 15:28:00