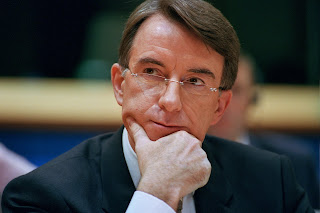 Disgusted I am at news over the weekend that Lord Mandelson is receiving pay from the EU for doing absolutely nothing. Two years after leaving the post as a commissioner, Mandy is among 17 former commissioners still receiving half of their former salaries. Not only that but it's £8,600 a month!
I mean really, how many other people leave a job and are still getting paid for NOT doing it two years later? It's not like Mandy's been hard up, on the dole, trying to get by from week to week. Even on this half salary he could pay the dole to around 15 people who really did need the support.
It sickens me that at the same time, I am fighting tooth and nail to make sure the EU doesn't pull the plug on funds to Wales which have been in place for years now and are responsible for thousands of jobs, because if the money suddenly disappears God knows what will be flushed down the sink and in what state Wales would be left.
This week a delegation from Welsh Local Government Authority are over in Brussels lobbying for protection of Regional Development monies after 2013 in East Wales and Barroso himself is coming over on Thursday to discuss Structural Funds (and enjoy the golf no doubt). While I am fighting to make sure men and woman struggling in Wales stay in employment, and demanding the UK taxpayer sees some return on the amount of money poured into this undemocratic organisation, it is galling to see the likes of Mandy still receiving 8 grand a week for having sold our country to Brussels.
I suppose his autobiography couldn't have sold that many copies afterall, because surely no one would suggest he was THAT greedy???