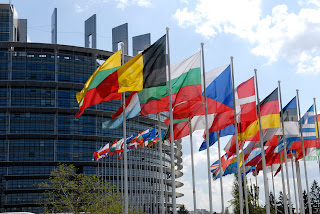 Summer recess gave people plenty of time to stew over the state of politics across Europe. It’s been a period of financial turmoil across the globe, leading to turning points in public opinion as nationalism has been pitched against internationalism. Aid to Pakistan only crept in, despite the flooding being one of the worst humanitarian disasters of the last decade, with many citing the impacts of the recovering global economy while others pointed the finger at the country’s international standing. What many voters seem to want to hear amid cuts, growing unemployment and escalating public debt is that charity starts at home. None more so, would it seem, than the Germans. Wearied by the weight of the Eurozone leaning upon German austerity for bail-outs, many Germans no longer want to be the piggy bank for the continent. Support for the European Union has plummeted to its lowest level across the continent. Greeks feel imprisoned in an economic stranglehold by Brussels, France has taken action over the country’s Roma population despite heavily furrowed brows in Brussels and Iceland, once a keen prospective member of the EU, has gone to war with Scotland over mackerel quotas, not only potentially decimating the North Sea’s population of the fish, but also their chances of entering the EU any time soon. So it is absolutely perfect timing for the budget Commissioner Janusz Lewandowski to state in a German newspaper that the UK rebate was no longer justifiable. Perhaps he was trying to soothe the embittered German public by suggesting the second biggest contributor to the EU would also be made to cough up more taxpayers’ money. But this is surely a fight he cannot win. Without the rebate, the UK's contribution as a percentage of national income would double that of France and be one-and-a-half times the size of Germany's. Already we have seen the rebate halved from 6 billion to 3 billion euro under Blair. Yet even with our rebate intact, according to the Office for Budget Responsibility the UK contribution is set to treble. The £3bn paid in to Brussels in 2009 will soar to a massive £8.2bn by 2015, despite many Government departments being asked to make cuts of up to 40 per cent. Not only that, a queue of poor countries knocking on the door to be let in to the EU, bringing with them roads that need resurfacing, town centres that need regenerating and millions of underpaid or unemployed workers with free passage to the UK will only exacerbate the levelling off of wealth across the Union.

But it’s not just direct cash payments and loss of jobs that has such a detrimental impact on our lives. Everywhere you turn Europe is casting a shadow over the way things are run in this country. Huge pharmaceutical companies are profiting from enormous price hikes on life saving medication, meaning essential drugs cannot be afforded by the NHS. EU laws that permit exclusive licenses to drugs manufacturers mean pharmaceuticals can hold the patents for specific drugs and place any price tag on their retail that they wish.

The working time directive is haunting the pages of the press again, with scores of UK doctors coming out against the impact the imposed 48 hour week has had on patient care. It’s suggested up to a quarter of junior doctors are leaving their training within 2 years, many to take up posts in other English speaking countries. The European legislation limiting individuals to a maximum working time has seen the NHS shake up rotas to make sure senior medics are on call during busy and stressful times, leaving junior doctors to work the majority of night shifts and weekends without proper supervision and guidance.

It’s remarkable to me that while high profile legislation such as the working time directive attracts media interest in retrospect, once the damage is done, very little is publicised prior to adoption, meaning rarely do members of the public get to protest against laws from Brussels before they are galvanised. Despite this, the European Commission, not content with media apathy, are seeking to revolutionise the President of the Commission’s communications staff to ensure Mr Barroso raises his profile across the Union. He will have a TV producer and photographer at hand 24 hours a day and a team of staff to monitor the blogosphere and quash any unpopular comment that may arise. All afforded by the taxpayer. The Commission will also pay journalists to follow Barroso on foreign trips. Yet this week in Parliament, the Commission has had the audacity to raise the issue of freedom of expression in the European media. It seems they are increasingly unhappy with certain state owned publications and insist that newspapers should be free from partisan patriarchs. That is despite having spent some eight million euros themselves on entertaining and “training” journalists, particularly in Ireland around the time of the illegal second referendum on the Lisbon Treaty.