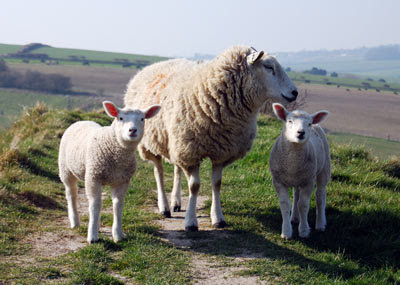 Spoken by an English tongue, the word has an onomatopoeic resonance that sounds rather gruesome, slightly Frankensteinian and fitting of a fictional disease in a Fin de Siecle Gothic novel whose emblematic manifestation is embryonic mummification. Sadly, however, it is not a fictional disease dreamt up by an author with a taste for the dystopian. It is the latest virus to spread among livestock in Europe and will potentially wreak havoc in Wales this year and potentially for years to come.

SBV was first identified last year in the eponymous Westphalian German where it was originally discovered. It has since spread across Germany, the Netherlands, Belgium, Luxemborug and France, before eventually crossing the Channel to arrive on the South coast of England. Invasion is now creeping northwards and spreading throughout the southern counties, up to Gloucestershire, where it may well be poised to filter across the border into South East Wales and beyond. Reported cases to date, with estimations changing on an almost hourly basis, sees the largest number of confirmed cases of 772 separate farms in Germany, followed by France with 277, Belgium with 166 and The Netherlands with 123, but by the time you are reading this, the number has potentially surged.

Despite the apparent sudden geographic spread, there is however no pattern to reported cases of infection. Scientists are certain that they are looking at a vector-borne disease, meaning infection is most likely passed through midges or biting insects as in the case of Blue Tongue. This would possibly suggest large under reporting of incidence, meaning the true prevalence of Schmallenberg remains worryingly unclear. There is also no reliable antibody test, thus positive virus identification is as yet impossible in many suspected cases.

Either way, even going by present statistics alone, we are dealing with an epidemic of significant scale.

Much like human conditions with similar causes, such as malaria which is transmitted by mosquito bite, it is not believed the virus can be transmitted between animals. However the defining symptom of Schmallenberg and its greatest potential risk to livestock is through its propensity to be passed from mother to foetus, where the greatest impact of the problem is observed.

As a result there is as yet no restriction on the movement of livestock. Many in the industry argue that to bore out such punitive restrictions at a time when the industry is likely to face an enormous economic blow would be overreactive and highly damaging. Yet this reveals a far graver problem. One can regulate to an extent the movement of cattle and sheep, but how does one restrict the migration of ticks and midges? Similarly with no reliable serological test and no vaccine, disease detection and prevention are extremely difficult, if not impossible.

The industry is therefore in a position of stalemate. Other than seek to mitigate the economic fall out of Schmallenberg on affected farms, little else can seemingly be done. There are no plans to cull infected animals, so the scenes witnessed during the BSE crisis in the UK are unlikely to be blighting television screens and turning the rural ideal into a horrifying post apocalyptic ovine bloodbath. Similarly real time farm closures witnessed during outbreaks of Foot and Mouth are unlikely to serve any real purpose, with knee jerk restrictions authored in a state of panic more likely to further blight an industry on the cusp of perhaps one of the greatest economic hardships this century.

However as I write this on a glorious sunny day at the start of March when clemency has at last touched our weather systems for the first time this year, the welcome return of the sun also hails the beginning of lambing season. In Wales the sight of newborn lambs frolicking in the countryside has become the pastoral idyll of springtime. Yet combined with the reproductive boom of biting insects, this spring could well signify the advent of desolation to a number of farms across the country.

Infection could spread exponentially over the warmer summer months, and only as the lambing season begins will farmers know whether they have been struck by the virus, or whether it is working its way through flocks as the majority of us bask in the first sunny spell of the year. Within a few months we will also approach the birthing season for cattle, finally revealing the true extent of the spread of Schmallenberg in the UK.

Vaccination meanwhile is still at least two years away, according to National Sheep Association chief executive Phil Stocker. However, Dr Dan Tucker, of Cambridge University, has suggested that livestock may develop immunity after they have been infected for the first time, likening the disease to human Chicken Pox. Yet other reports suggest that the sudden escalation and range of cases could be indicative of what may in fact be the second year of infection, which would suggest that the virus may be able to survive the European winter and could lie dormant until next year when it could strike again.

So far there is no indication that SBV can affect humans. Assessments carried out in the Netherlands concluded the risk to human health is likely to be very low but cannot be ruled out. Without wanting to scaremonger, the same was once said about CJD. However as the most likely vector for infection is through insect bite, one would imagine transmission is unlikely to come in the form of contaminated meat.

So what is Schmallenberg virus? As yet, there is little we know about it. It manifests in congenital defects seen in close to term and newborn lambs, calves and goat kids. Often the foetus or newborn will have twisted limbs or be still born. Farmers across Western Europe have also reported what appears to be mummified newborns. In mild cases neurological damage leads to signs of malcoordination and paralysis. However in adult livestock, the symptoms are far more subtle. Milk yields may be reduced in cows and in some cases fever and diarrhoea are also present, yet to the majority of the herd, something akin to a mild case of flu in humans would be hard to detect.

Due to it not being a registered identifiable disease, there is still no blood test available that could be used on farms, although scientists in the Netherlands and Germany are close to developing such a test. However this also means that financial protection is not in place for farms where stock may be heavily affected. Both Lloyds TSB Agriculture and the Bank of Scotland have both announced what they describe as a sympathetic and supportive approach to their customers, urging anyone with difficulties to contact their bank manager as soon as possible. The NFU are also working around the clock to draw up provisions in insurance policies and calculate the cost to the industry and how to mitigate a severe impact on farming in this country, however the true impact that will be felt is hard to even broadly estimate.

So far Schmallenberg has shown signs of virulent spread and reports so far had are likely to be only the tip of the iceberg. As the lambing season continues, the true extent of still births will be revealed, often ranging between 10 and 40 per cent and representing the loss of thousands of pounds per affected farm.

Agriculture has suffered repetitive disasters since the early nineties when BSE changed the face of farming in the UK for decades. Swine flu was then followed by avian flue, and of course foot and mouth still poses a risk alongside other hard to eliminate conditions such as TB. However one thing is for certain. Panic measures and extreme reactions can be dangerous and unnecessarily harmful to the agricultural sector, already suffering from rising fuel costs and increasing price of animal feed. What is needed is sensible, cautious and respectful regulation coordinated alongside active stakeholders in the industry. Focused delivery of protection and remuneration should be the intent of national governments, but there is also a call for sharing information, cooperating and creating a unified response across affected territories in Europe. Whilst I baulk at the sort of heavy handed treatment the EU has doled out on British farmers over the past few decades, it is mere common sense that laboratories, farmers and veterinary scientists in affected countries across the globe work together to try to reduce the spread of the disease, investigate its potential risks and ideally eliminate it altogether.

March signals the advent of vernal abundance. Lambing season turns Wales into a picture postcard of the Welsh countryside idyll. Yet Wales’ long tradition of sheep farming is likely to suffer over coming months. With over 100 farms in England, including cases in border counties, suggesting it will soon spread to Wales.

However panic measures would be unnecessarily harmful, especially a block on the movement of animals when the virus is likely carried by midges. I have written to the Commission asking whether they are supporting the development of a blood test and vaccine and what measures they are likely to enforce to mitigate the spread of the virus, advising against anything that could harm the sector. In recent months new legislation restricting pesticides has left farmers concerned. I have asked the Commission to investigate a possible link, as well as scrutinise other existing legislation that could prevent Schmallenberg being treated quickly and efficiently.

In situations like this, it is important the farming industry stands together. Any action taken should be decided in cooperation with farmers themselves.