Croatia's EU Membership - Started as it will indubitably go on 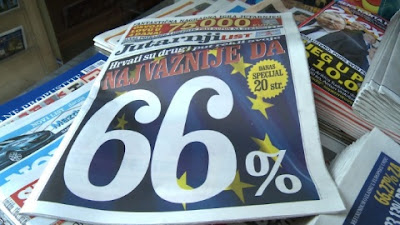 And so it would appear Croatia will be the 28th member of the European Union, given that the bloc ratifies its application, which I think we can assume is a given.

News reports told of an outright majority but is this really the case? Well, as is often true of referenda, especially those associated with EU membership such as in the case of Ireland back in 2005 and of course in 2009 when the referendum was famously re-held in order to garner the right outcome, there is always another side to the story.
It was reported that while 33% of those voting chose NOT to join the EU, double the amount, 66% of the turn out, voted in favour of EU membership. So where's the
grey area?

Well, first of all, it would appear Croatia had more voters than citizens.

According to the latest 2011 Population Census, Croatia has a total population of only 4.29 million, yet according to the Electoral Commission it has 4,504,765 voters over 18 years of age eligible to vote. Now that is a quickly ageing and expanding population!

Also, given that most Croats abstained from the referendum, resulting in record low participation of only 43%, even if all those who turned out voted in favour of EU membership, it would still represent a minority.

Conveniently however the Croatian Government changed the constitution just prior to the EU referendum revoking the rule that invalidated a referendum unless at least 50% turn out was achieved.

At the first-ever referendum held in Croatia in 1991, the turnout was 83.5%, of which 94% voted in favour of independence. So what stopped people running to the polls this time around?

Very often people are dissuaded from polling their opinion when they consider the result a foregone conclusion. 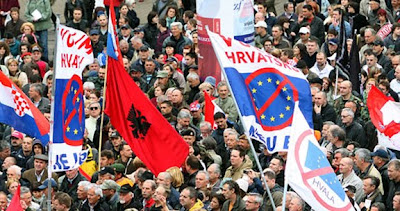 Prior to the vote on EU membership, Croats, like the Irish before them, were subjected to a massive propaganda campaign with the Government spending huge amounts of public money on a Yes campaign while the No campaign was pitifully unfunded. The European Commission also ran its own very expensive Yes campaign, enlisting state enterprises, celebrities, corporations, while State TV aired pro-EU adverts for free, Croatia Post delivered 2 million leaflets as well as the city of Zagreb placing free EU advertising on trams.

In theory the referendum campaign was restricted to a four week period however the hugely financed Yes campaign was already spending tens of thousands on pro EU advertisements on radio and television. In fact one newspaper, the Vecernji List Daily reported on the 10th August that the Ministry of Foreign Affairs and EU Integration paid for more than 13,000 radio adverts and 2,300 TV adverts across 80 radio stations and 6 national and 15 local TV stations all in the months of June and July. This wave of propaganda only increased in cost and breadth over the following six months in the run up to the referendum.

The message was EU Prosperity or isolation and poverty. Some reports even suggest that days before the vote, Foreign Minisiter Vesna Pusic threatened Croatia's 1.2 million pensioners that they would lose their pensions if they voted against EU membership. At one polling station in Zagreb, accounting for several retirement homes with 1,100 pensioners, 80% voted in favour of EU membership.

Whether you accept these reports as valid depends upon your desire to believe them or not. This is what makes referenda very tricky subjects unless clear legal permaters are drawn up, regarding turn out, or legality of not voting, and governance of the funding of campaigns.

From my point of view a

nd considering the two cases in Ireland where public opinion was neatly sidestepped when it appeared it would not validate the EU's wishes, I would tend to imagine that dark forces were at work. Especially considering the first time Croatia was questioned on EU membership, a resounding 94% voted against joining the EU. Given the EU's recent track record and the single currency crisis, plus new legislation that demands any new member sign up to the Euro, it is hard to see how the population has suddenly changed its mind, without some very not-so-gentle persuasion. It may not have been a very large turn-out, but it certainly was a mammoth turn-around.