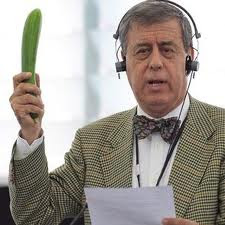 It’s all getting a bit nasty in the European Parliament these days. In fact, MEPs are getting so hot under the collar there will soon have to be weapons scanners on the entrance doors to the hemisphere with burly Belgian cops sweeping metal detectors up and down the trouser legs of infuriated MEPs.

Ok perhaps not, but Spanish MEP Francisco Sosa Wagner’s strong words about Cucumbergate were accompanied by a threatening wave of his mean green cucumber cudgel right in the middle of the chamber!

The EU has been caught in the crossfire between Spain and Germany over accusations that the recent deadly outbreak of E-coli all began with Spanish cucmbers. As a result thousands of farmers in Spain had to destroy millions of pounds worth of crop. The EU, as compensation, has proposed donating £134million in aid, yet the Spanish are threatening legal action unless Germany reimburses their loss 100 per cent. This is one cucumber sandwich that the British will not be having with their tea.

Meanwhile Europe are also getting tough on taxation. EU chiefs are demanding direct tax powers which could cost families up to £200 every year. That’s despite the cost of bailing out our neighbours costing the UK over 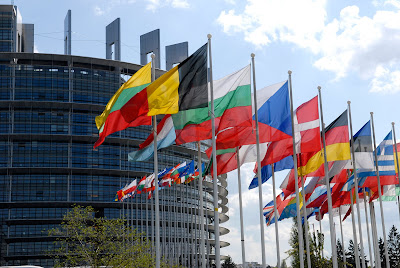 £12.5 billion, far more than has been saved by savage government cuts.

Cuts which, incidentally, the European Commission approve. The fact that the European Commission has come out and demanded Westminster should stick with their “Plan A” for budget cuts and tax increases suggests that we probably are doing the wrong thing. What with protests in Madrid, Lisbon and Athens over EU and IMF enforced austerity measures, as well as three failed Eurozone economies and many more ailing governments in the single currency, the Commission seem increasingly out of touch with their people and decreasingly less likely to give a hoot anyway.

In fact over the next six months the European Commission are unrolling the “European Semester” where they will demand member state governments submit national budgets and reform programmes for EU approval. Jean Claude Trichet, the President of the European Central Bank, has described the new European Semester as the beginning of centralised fiscal policy.

We will watch and wait to see whether Osborne is happy to dance to the Brussels beat.

The one thing that

is desperately missing from this dialogue is the fact that actually, Eurozone countries should be able to leave the common currency and return to independent fiscal governance. Currently the ECB in Germany controls interest rates across the Eurozone, to the detriment of weaker economies and in part responsible for the collapses in Ireland, Portugal and Greece. I put this forward to Barroso in the last President’s Question Time.

Notice how he fails to answer the question and instead talks about how the Euro was not responsible for the world recession (well duh? But really, it was a massive contributing factor to the so-called euro contagion) and that he is sure Greece wants to stay in the Euro. Frankly, they don’t really have much choice given how endebted they are now to the EU and IMF. No wonder Brussels is doing their utmost to make sure the next IMF President is a European, and, surprise surprise, from France.

I also challenged Parliament over a little and at first seemingly unobtrusive amendment to a directive on HGV charges that plans to add an EU carbon toll. It is basically the first indirect tax to be levied by the Commission. Although the UK does not partake in the Eurovignette scheme, the government has been discussing joining in 2015, yet before that the Commission reserves the right to make their little “experimental” carbon charge obligatory. We all know that such costs are never fronted by big business and always land in the consumer’s purse, but what is worse is the fact that taxation powers should be discussed and passed by unanimous vote at Council level with all 27 leaders of the member states agreeing to the proposals.

This matter however has been slipped through Parliament as it “only relates to transport” which is an EU competence under the provision of the Lisbon Treaty. A sneaky backdoor way to introduce an indirect tax, because frankly, the Commission know full well not all member states would agree to such a policy.