Yesterday Radio 4 transmitted a programme they called The EU Debate

Sir Stephen Wall, the former diplomat and EU adviser to Tony Blair, argued his position against a panel who want Britain out, including UKIP's own Roger Helmer, Dr Helen Szamuely - Head of research for the Bruges Group and Conservative MP Mark Reckless.

The debate was held at The London School of Economics and Politics (LSE).
The audience was resoundingly pro-European Union.

Some would say this is no surprise. LSE boasts "a distinguished history" in EU Law. They readily point out that "The first major English language textbook on European Union law was published by an LSE academic...Members of the Department have gone on to be members of the Court and similarly the Court is represented in the Department.."

It is perhaps the foremost University in the UK for any graduand seeking a Commission or ECJ based career, so one would imagine the audience of the debate was largely made up of people either aspiring to work for the EU or a student body of a broadly similar mindset.

It is rather sorry that the BBC chose to stage the argument with a roll-call on voting intention at the start of the debate (the Yays have it) and then the same question posed at the end of the debate to demonstrate that the vast majority still applauded the EU. It certainly whiffed a bit of a set up, pitching not one, or two, but three Eurosceptics against one avid supporter to then fimd that their arguments had gained no purchase with the audience at all.

It would be like having three Michelin starred chefs attempting to extol the virtues of Chateaubriand with a side of Fois-Gras to an audience of Vegans.

The final product was this semblance that one rather unpopular Europhile (just former association with T Blair often casts people into the instant role of pantomime villain) could be pitted against three articulate Eurosceptics, and guess what, the EU still comes out on top. Well there you have it. A foregone conclusion. The EU is the shiniest and best thing to e'er happen to Western Civilisation.

But listening to the arguments put forward by Mr Wall, there was also implication, the same one often used by the left-leaning press, that leaving the EU is the same as getting into a time machine and returning to a war-stricken divided Europe of workhouses, soot and poverty.

Oh and Britain will become as insignificant on the world stage as Micronesia.

It just doesn't make sense. Nobody is denying that the EU at some stage may have done some good stuff.
But the ever centrifugal pull of power into the midst of a democratic vacuum exhibited by Brussels as it clambers shambolically through the self-inflicted wastelands of economic misery is eerily reminiscent of the very Communism Mr Wall exhorted the pan-European bloc gallantly overcame.

I shuddered at his use of the words "For safety's sake" as if without the very Union that is pitting nation against nation in an epidemia of economic contagion, puttting people on streets and causing petrol bombs and smashed shop windows to become a regular sight once again in the Mediterranean, Europe would be thrown back into myre of multi-national conflict. What an utterly grotesque assertion, and how undermining to NATO, the UN and 21st century common sense.

And how undermining to the UK that without Europe we would no longer have any sort of influence where it counted.

It is as if there is a clear dichotomy. Either be in the EU or hate neighbouring European countries and become an isolated and impoverished little territory.

Why nobody seems to posit that cooperation, trade and solidarity may actually be enhanced by leaving the European Union, which as far as most can see is merely the architect of economic and political failure, is a mystery to me. All you have to do is open a newspaper to see the turmoils affecting Greece, Ireland, Spain, Portugal and so forth.

Of course Switzerland, who remains resolutely outside of the EU but fully cooperational in terms of free trade, is planning to use the Large Hadron Collider now Higgs-Boson has been found to forge a network of guerilla tunnels under continental Europe and take us all by force, all the while smirking as she benefits from selling Philip Patek's in return for civilisation-destroying arms. If that sounds ridiculous to you, then surely this proposition that the EU membership is essential for European peacekeeping also rings of utter codswallop.

Notice how the debate rarely even touched upon the catastrophic failure of the Euro, the self-defeating agricultural policy dessimating UK farming and neutering our ability to be self sufficient, let alone the Common Fisheries Policy which not only practically eradicates all ocean life from the waters of Europe, but destroys the coastlines and fishing communities of numerous third world countries.

I must admit I listened with pride at the arguments put forward by Helmer et al.
Yet a clever bit of editing and a sprinkle of production values and the BBC came across as the mouthpiece of Europe.

US President Harry Truman famously had a sign on his desk in the Oval Office that said "The Buck Stops Here".
The expression itself is thought to originate from poker, whereby a marker or counter indicates whose turn it is to deal. A player could pass the "buck" into the next player and thus buck his responsibilities. 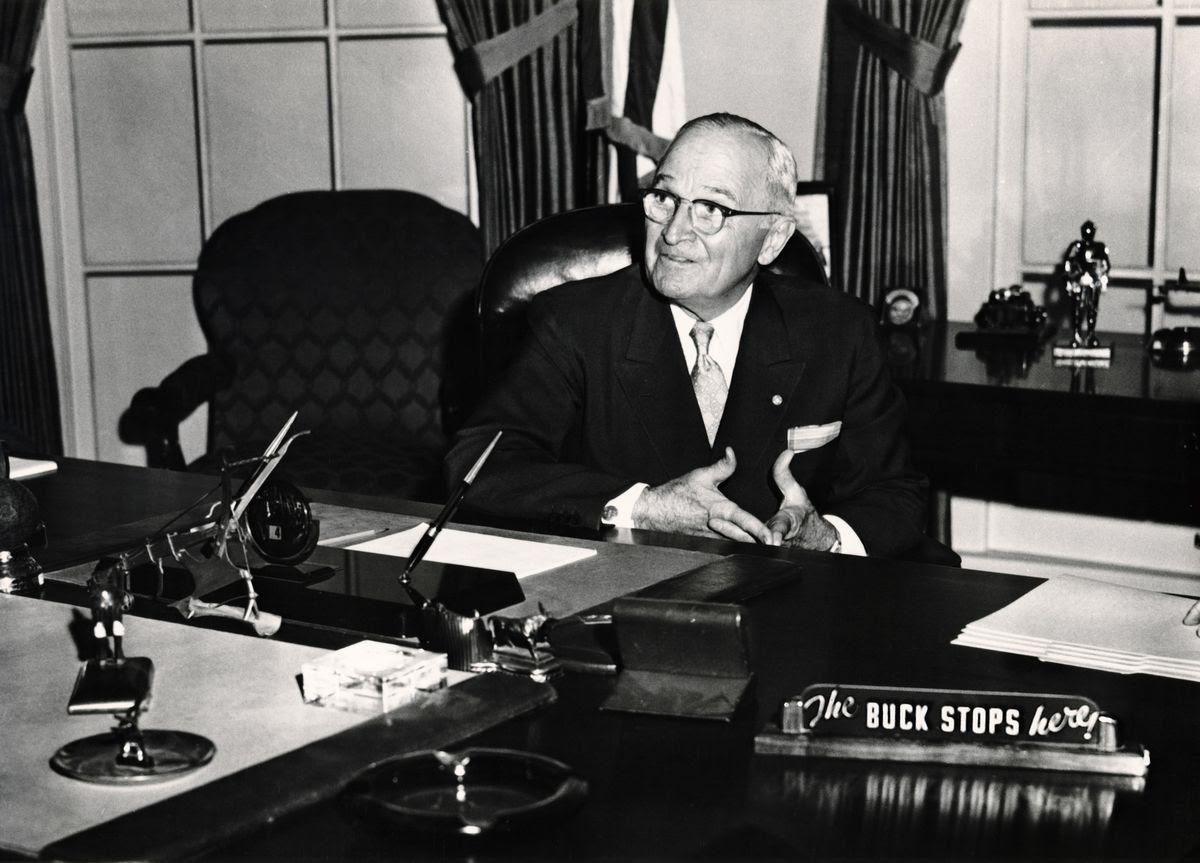 In international relations the phrase has come to mean the tendency of nation-states to refuse to confront an escalating issue in the hope that another nation will step up to the mark. Perhaps a more fitting representation of playing hot potato with multi-national responsibilirt would be the phrase "The Euro Stops Here". But then, where does the Euro actually stop?

I don't just mean in terms of the currency itself. The very problem with the single currency was that it was created without any sense of centralised control. Instead a sort of Ashram-style communcal ownership of the currency was forged. But as the edifice began to crumble, all of a sudden shared responsibilities were denied and finger pointing, points-scoring and accusatory proclamations shattered the previously optimistic murmured assent of the great single currency project.

It is of course summer recess in Brussels. That means the big boys in the EU are essentially on their holibobs, leaving nobody to call their shots for a couple of weeks and essentially passing the onus onto the European Central Bank to calm the waters before everyone can return to the drawing board and bang their heads together once again.

Rather unhelpfully, the ECB President Mario Draghi has been left the usual script.
Phrases like "The single currency is not reversible" and "The ECB will do whatever it takes to save the Euro" are being jettisoned out at the world's media, who, of course, have heard it all before.


Then there was even the line “In the coming weeks we will design the appropriate modalities for such policy measures,” alongside the usual affirmation that eurozone countries "must use the time constructively to move towards closer integration in the eurozone".

The ECB's bond-buying programme had managed to actually bring down the costs of government borrowing in the Eurozone via the trade between banks and government institutions on the secondary market. However this was shut down in January and anyway, actual costs of government borrowing are largely determined at auctions in the primary market where bonds are sold directly to banks (bonds are essentially I.O.U.s which certain crafty financiers agree to "buy" ata rate of interest which they believe will land them a sizeable profit. Of course, the less desirable the I.O.U. the higher the rate of interest demanded by the potential purchaser). It is here that the ECB would need to bring down the costs in much the same way as the Bank of England has done in the UK, effectively spending 20% of UK national income on government debt.

The same sort of intervention by the ECB would be a bond purchase of around €1.6 trillion.

But the ECB's constitution prevents it from lending money to European governments, precluding it from buying bonds at government debt auctions in the primary market.

Instead, under the Eurogroup plan, the EFSF (European Financial Stability Facility, or to you and I, the bail-out fund) would do the buying...through the ECB.

The problem is however that the bail out fund which at one point had €440billion has already thrown €200billion at Greece, Ireland and Portugal and has recently committed another €100billion to Spanish banks.

Yet the ECB has also stated that "first of all governments need to go to the EFSF; the ECB cannot replace governments". But there's nothing really lefy in the EFSF, and what's more the statement made by the ECB was not really backed up by one vital player:  Jens Weidmann, head of Germany's influential Bundesbank, the ECB's biggest shareholder. The very fact that Draghi named the dissenter was clear intent that rather than buttering up Germany as potential paymaster, the institutions are tempted to round upon the economic powerhouse by portraying Germany as some kind of Judas.


He is without doubt fully aware that all this chit chat must get through Germany's Constitutional Courts in September.


Draghi has also reaffirmed that national governmens had to do their bit and stick to, if not enhance, already devastating austerity measures and use their bail out funds before turning cap in hand to the Central Bank.

Essentially all we have heard from Draghi is the usual rhetoric designed to temporarily calm the storm while everyone enjoys their vacation. However, perhaps significantly, the German Government has backed the ECB's statement despite officials at the German central bank being openly critical of using ECB resources to buy the bonds of struggling countries such as Greece or Spain as against the spirit of the ECB’s statutes, which forbid it to finance states. The bank simply reiterated that “There haven’t been any changes” on this position.

The question over whether the ECB could grant the proposed €500billion rescue fund a banking license in order for it to borrow from the ECB has been shot down by Germany. Yet while the Bundesbank cannot veto ECB policy decisions, the very fact that Germany is the biggest shareholder in the ECB due to the size of her economy means it is vital that they are on board.

And so we have in practice what the EU was designed to prevent.

The question of on who's desk the sign "The Euro Stops Here" should sit is increasingly obvious to us all. Once again the future of Europe will likely be determined in the Bundestag unless all the other European states can combine forces to overcome her might.