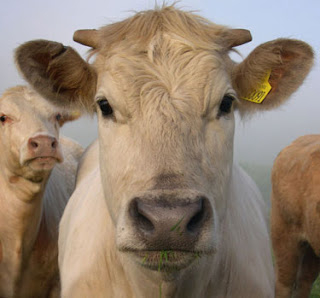 Potty thinking, but whose idea was it anyway?

Fellow UK MEP Julie Girling was on a rampage over her new theme du jour, Chinese Lanterns and was highlighting the dangers posed to livestock.

Perhaps little did she expect the ensuing debate that would burst forth over magnets put inside cows' stomachs.

Of course, to raise concerns over the growing popularity of what is basically a floating naked flame that could fall anywhere within a reasonable radius of the point of departure, you do not expect then for the Commission to pose the solution of implanting magnets in the stomachs of ruminants. But that is typical of the European Commission. You ask them what the answer to 2 + 2 is and they will tell you it is the same as 1+6 x 18-22 / 4 - 6 / 5. They are paid huge salaries of course, to no doubt "think outside the box"

Whilst I am not a supporter of blanket bans, especially not made by the Commission or anyone else in Brussels, Chinese Lanterns do pose a threat. But it is not only to livestock. Organisers at Glastonbury festival send out patrols to make sure the airborne incendiary devices are not floating over the swathes of canvas that accommodate the thousands of festival goers who buy hundreds of pounds worth of tickets to see their favourite bands, not involuntary pyrotechnical displays.

Similarly can you imagine the consequence of one of these lanterns homing in on an oil refinery, or petrol station? Or tumbling out of the sky onto an unsuspecting jamboree?

Cow magnets does not answer the question.

But that is where the argument ends. Although the proposition is of course ridiculous in the light of the Chinese Lantern issue (and here I will point out that I have not read Ms Girling's written question to the Commission but one must suppose it underlines the particular grievances of UK cattle farmers) it does turn out that Cow Magnets exist and have been used successfully to prevent overzealous ruminants from sufffering internal injuries from the plethora of metallic objects they ingest over the course of a lifetime of indiscriminate munching. And to take the argument any further would see legislation havig to be drawn up to prohibit the use of a myriad metal objects that sneak their way into the countryside.