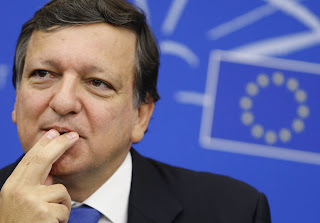 We are used to the witty exchange of banter flying across the Chamber in Westminster. Whether the heckling is highbrow, or the humour deliciously lowbrow, the energy in the House of Commons is the envy of many political institutions globally.

Not surprising then that the EC thought they could liven up Plenary in Strasbourg by adopting President's Question Time, modeled on PM's Questions in The Commons. Afterall, the European Parliament is a huge, overly bureaucratic, political quagmire of an organisation.

So during Jose's first QT, I saw the opportunity to throw at him a question that matters greatly to my Welsh constituents.

Basically the EC want to introduce a system whereby farmers microchip every single sheep in a flock to trace their every movement. The proposal was cooked up after the last foot and mouth crisis, but has met with fierce opposition.
It's now due to be pushed through in January 2010, despite the fact that the equipment doesn't work
(only a 75% success rate, with malfunctioning especially common in cold and wet conditions - hardly ideal for Welsh Mountain Sheep Farmers )
It's going to cost our farmers lots of time and money when the industry is already battling recession, and will expose Welsh farmers to penalties if they do not comply with the system (or when the system fails them.)
So I ask Barroso about why the EC is so adamant about pushing through the legislation in the New Year.
I drew comparison with the issue of immigration in the UK.
( Take a look at today's revelation by the ONS that our population could soar to 71.6m by 2033, with more than two thirds of that rise due to immigration. )

It would be bizarre if the UK knew the exact whereabouts of every single sheep in the land when we hardly know who is coming to live in here and where they're planning to go.


Sadly Barroso missed the point, and didn't like my supposed comparison of humans and sheep.
It seems we have a long way to go. Thankfully we have Nigel to show him how it's done...
Posted by John Bufton MEP at 15:07:00