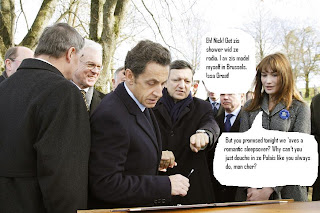 While people in the UK are still reeling about MP's expenses it might be worth contextualising our grumbles about the frivolous and greedy use of taxpayer's money with what's been going on over the Channel.

The French President's impulse spending would make flipping a caravan with a castle look somewhat modest.

Reports that Sarkozy spent a quarter of a million pounds of taxpayer's money on a shower he didn't even use have been spreading across the continent. Quite frankly I didn't imagine you could even buy a shower worth that much. Reports have described it as having in-built massagers and surround

During France's 6 month term as EU leaders, Sarkozy spent a whopping £160m in expenses. Now every Government likes to put on a bit of a show when the circus comes to town. And every time a new member state takes on the role of being leader for 6 months, the EU kindly tops up National funds to help afford all the summits, and the dinners, and the conferences, and the tours. So how come in 1995, France managed on only £12m, which works out as less than 10% of Sarko's Presidential Ents Bill.

It's even been reported that the French Premier gets out of bed for nobody. On one occasion Sarko cancelled an entire EU event he was set to host in Evian because he wanted to sleep in his own bed in Paris. Hundreds of disgruntled journalists, delegates and EU officials had to be sent home, grumbling and braying for even more cash to come out of the Presidential Bill by way of compensation.

For a Mediterranean Union Summit at The Grand Palace in Paris, Sarko summoned more than five hundred workers a day to spruce up the venue, with another 300 more doing the night shift. Perhaps the Grand Palace was somewhat of a misnomer to Sarko, who's shopping list also included 194,900 euros for potted plants, 653,703 euros for air con and 301,208 euros for a conference podium (with built in booster pedestal, one would imagine). The end of summit dinner itslef cost a staggering 1,010,256 euros -- more than 5,000 euros per head. 90 grand was even forked out for a red carpet.
Posted by John Bufton MEP at 11:58:00