Is this what you call a democratic political system?

It is so disheartening to watch the government, supposedly representing its people, filibuster a Private Member's Bill, formed after a call from more than five thousand people, until it is presented before an almost empty house, when that bill relates to the structure via which 75% of UK law passes. 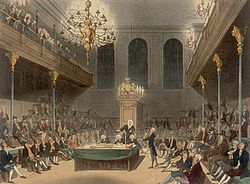 In the end, Douglas Carswell's attempt to get UK membership of the EU debated in the Commons resulted in being a damp squib with so few attendees it held the merit of a discussion down the local boozer. What were we to expect?

In principle, private members' bills follow much the same parliamentary stages as any other bill but in practice, the procedural barriers are far greater. Such bills are only brought to the house13 Fridays a year. Considering most MPs return to their constituencies on Thursday evening, the meagre five hours of time available on selected each day to cater for several private members' bills make it easy for topics the Government wishes to be brushed under the carpet, to be, well, brushed under the carpet.

Unlike Government bills, these debates are not timetabled, meaning the Government can whip ministers into talking the bill, stopping further progress by preventing a vote.I think it's fair to assume that Jeremy Wright may have tried his hand somewhat at filibusterng today, with a rather circumlocutary soliloquy on Family Courts.

The bill's proponent can force a vote only with the support of at least one hundred members. With a headcount of mere tens, this had the practical effect of blocking Carswell's private members' bill from gathering anywhere near enough momentum to even grace the pages of the newspapers, one anticipates. 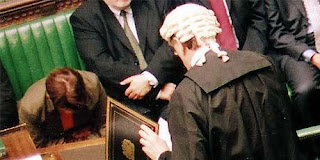 Another date for second reading will also be set for bills which have been talked out.We can look forward to part two sometime in March. This is a formality; so the bill will be placed to the bottom of the order paper, and will likely be objected to on each future occasion, leaving it no practical chance of success.

What's the point then? When thousands have pushed for something to reach Parliament and it can be extinguished like a flickering candle, there is something seriously wrong with the passage of a backbench bill through Parliament.

The Government are starting to dangle the carrot of a referendum on Europe in front of the voterate. Why when 16 year olds have been given the vote on Scotland's membership of the United Kingdom has nobody under the age of 55 been given the chance to vote on UK membership of Europe? Even those who have had the opportunity to make a choice would have voted for or against a much different political beast than we have today.

Almost 40 years ago to the day the European Communities Act was debated by the United Kingdom to allow succession to what was then the European Economic Community. We were told "Common Market or broke". What we have four decades later, with gross state intervention and an everly centrist and bureaucratic sclerotic beast in Brussels is the realisation that shackling ourselves to this undemocratic, hulking blackhole of a Union will lead us to be broke, like Spain, Greece, Italy, Portugal, Cyprus and so forth.

We live in a very differnet world today. A globalised marketplace. We should be trading with all corners of the world, not running at a trade deficit with our broken and clumsy near neighbours and allowing all our former bilateral deals to be subsumed within the quagmire of European legislative dross.

The same is true of immigration. With the UK only just recovering from a double dip recession, with the propensity to go back into economic contraction again more than just a creeping threat, how can we afford the 23,000 new babies born to Polish mothers alone in the UK in the last year? Our vital public services are already bursting at the seams with cuts needed to bring down the state deficit which structurally is one of the highest in the world. 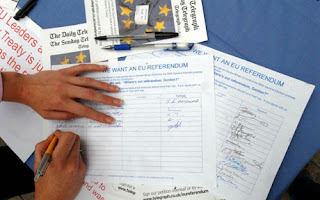 And yet issues that affect our daily lives, underpin the very fabric of society, like police on the streets, nurses in hospitals, teachers in schools, pensions, social housing, energy bills, food on supermarket shelves, working hours...I could easily go on for days...are either governed by laws made in Brussels by faceless bureaucrats, subject to the red tape which costs our economy billions, or are being grossly underfunded because Britain continues to pay out £10 billion every year to Brussels which could be better directed towards things that really matter.

Our farming has been put into the red, our fisheries have been decimated and now we are looknig at having to pay those responsible even more money for the "privilege" of being a member of their club. Meanwhile that money is being poured into other European countries while their citizens are flocking over to the UK to benefit from our welfare systems (again something they are able to access under European law) spreading the burden onto the British taxpayer who meanwhile has absolutely no say whatsoever.

I truly hope we will not go down with it as it sinks.

Now, more than ever, we need a vote. In or out.

I'm afraid just over half an hour of Tory Party private infighting won't cut the mustard.