Is this what you call a Union? 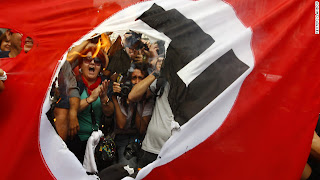 Not since Captain Corelli's Mandolin have images of the Swastika in Greece been so prevalent on our TV screens.

Is this really the 21st century reality of the European Union?
Chillingly, yes.

Fifty thousand people took to the streets to protest against German Chancellor Angela Merkel's visit to Athens as she made her first visit to Greece in five years. Despite strict security measures and a ban on public gatherings, police still resorted to firing tear gas at protestors and arrested almost 200 people.

The Greek people blame Merkel for overseeing the strict programme of cuts that have been conditions of receiving financial help.

Greece is set to miss the fice year debt reduction target that was set when the country's €100 billion bail out was negotiated, that's despite the extraordinary measures taken by the Government that has seen thousands reduced to poverty and homelessness.

Across Europe the situation is deteriorating. In Spain the Red Cross has appealed to the public to supply food parcels for stricken countrymen and has launched a massive appeal for millions of Euros to help those most in need in the country. It is the first time such an appeal has been launched to help those in need domestically, with usual campaigns targeting the world's poorest in Africa and Asia. The charity say some 2.3 million Spaniards are now extremely vulnerable and in need of food aid.

Yesterday, Greek Prime Minister Antonis Samaris pleaded with the German Chancellor that his country was "bleeding" from all the internationally imposed cuts, however she showed no sign of backing down on German sanctioning of the demands, instead choosing to compare the situation in Greece to that in her own East Germany after reunification with the West.

You would think with so many Nazi-themed insults being bandied about by the disgusted people of Greece,  she would avoid alluding to the war.

Yet what we got from the Greek Government was more of a tail between the legs grovelling about rectifying mistakes, perhaps in reference to the image being portrayed by German media as a nation of lazy and workshy complainers. Similarly Merkel has been tarnished with Nazi Overlord representations through out Greece. Yesterday's meeting was more a PR stunt to show solidarity between the two nations, rather than a meeting to discuss a productive settlement and reinforce both sides' commitment to maintaining Greece within the Eurozone.

Yet for many, the cards are still very much in German hands.

German-led conditions attached to emergency loans have made Merkel the face of austerity for Greeks. Merkel has been depicted in the Greek media wearing jackboots and an SS uniform.

Yet the austerity is not working. The Greek economy is set to contract for a sixth year in 2013 while the government continuously fails to meet deficit-reduction target. The economic downturn is the worst since World War II, post Nazi occupation. Which brings us onto the thorny matter of war reparations.

Under German occupation Greece was forced pay war loans to Hitler, leading to hyperinflation and a famine in which more than 500,000 Greeks, or 7 percent of the population, died between October 1940 and October 1944, a quarter of a million from hunger.

It is believed that under  occupation from 1941 to 1945, Greece paid Germany some £86 billion, which many believe the German's still owe. Despite Greece receiving reparations from Italy after World War II in recompense for Mussolini's occupation of the country, Germany never paid Greece. Fast forward the clock sixty years and the irony that the Greek people see the German Chancellor as transforming their country into a "German protectorate" is evident amidst calls for the occupation loan to be repaid, which would go a long way to securing Greece future financial security.

Is this what the European Union, set up in the wake of World War II, was supposed to lead to?

One country dominating the affairs of another, peoples at loggerheads over who is right, who is wrong, and who owes who what?

It amazes me that the international community has failed to speak up on the issue. When it is falling to charities in 21st century Europe to make appeals for food aid due to political measures being enforced by other countries or unelected organisations, it is staggering that nobody is speaking up.

The UN's Development Policy and Analysis Division (DPAD) notes that the debt crisis in the euro area, especially in Greece, remains the biggest threat to the world economy. An escalation could trigger severe turmoil in the financial markets and a sharp rise in global risk aversion, leading to a contraction of economic activity in developed countries. In their World Economic Situations and Prospects report, they advise

"Breaking out of the vicious cycle of continued deleveraging, rising unemployment, fiscal austerity and financial sector fragility requires more concerted and more coherent efforts on several fronts of national and international policy making.
On the fiscal front, it is essential to change course in fiscal policy in developed economies and shift the focus from short-term consolidation to robust economic growth with medium- to long-run fiscal sustainability. Premature fiscal austerity carry the risk of creating a vicious downward spiral, with enormous economic and social costs.
Fiscal austerity has already pushed many European countries further into recession. This is particularly relevant for the debt-ridden euro area economies. Euro area countries have fallen back into recession, following fiscal retrenchment over the past two years. Clearly, the efforts at regaining debt sustainability through fiscal austerity are backfiring in low growth and high unemployment."

What is so staggering is that Europe, and when I say Europe I mean a few figures from the European Commission in Brussels, the European Central Bank and leaders of the wealthiest Eurozone member states, are being allowed to dictate policy that is having a very human cost.

One wonders if a similar situation was being faced by ECOWAS or with the CFA Franc whether or not Europe would be muscling in to dictate what be done to rectify the situation.

Although Central African CFA francs and West African CFA francs have always had the same monetary value against other currencies, they are separate currencies. They could theoretically have different values from any moment if one of the two CFA monetary authorities, or France, decided it.

Why does the Euro not break up and follow the same agenda?

Answers on a postcard please.
Posted by John Bufton MEP at 15:42:00