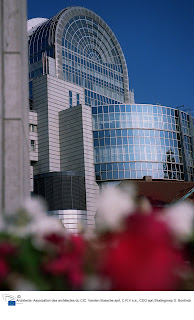 I did my bit in Brussels yesterday on the latest controversy sweeping through the committees. A leaked document from the European Commission on the future of the EU budget spells out sinister intentions to siphon off cash for ambitious policy making on migration, climate change and foreign policy etc. Affording themselves extra flexibility, as they put it, or less accountability, as it will come to mean, our grotesquely huge contributions will go towards building a superstate while the pitiful rebate we do receive will eventually be phased out.

The agenda quite clearly makes things much worse for the UK. The Commission hopes to curtail agricultural payments and funding to regions with a low GDP. Now they're planning to go even more Robin Hood and take more money from "the rich" to give to "the poor". No wonder so many states are queuing to get in!Roll up! Roll up! The EU want to buy more friends and more power.

At the moment Wales gets around 2.7 million euros from 2007-2013 b, 11.8% of what the UK receives in convergence funding. The entitlement to cash comes because the west Wales valleys have a GDP below 75% of the EU average. Cornwall and North Yorks also cash thrown their way, for example. Well this will no doubt stop after the regional allocation of monies is stopped. Wales will be lumped in with the rest of the UK and Britain, who, as one of the largest contributors, will have to pay even more to get even less back.

And the increased money being poured into Brussels will only go to fund the development of this grotesque political beast.

The development of some 200 regions in 16 of the member states will be sacrificed like lambs to the slaughter at the altar of a United States of Europe. It's not that we think they should necessarily get the funding, we want out completely in order to handle our own money thank you very much!But in many of these communities, in which one third of the EU's population live, programmes and projects that have sprung up as a result of funding will now see the plug pulled financially. What will happen to the people involved? How would they like to hear that the fact that they have huge unemployment, poverty, failing industries and poor economies is of little concern to Brussels who are simply intent on taking money to pump in to political domination.

The point is nobody, not even the committees involved who are set to lose a huge chunk of their disposable income, have been consulted or even informed on the tyrannical decision to let the big boys play with the cash.

I'm just wondering whether the French will kick off if they lose their agricultural subsidies?

When I addressed Plenary on the 11th November in on the matter, I was in fact down to talk about unlimited EU migration (you have to submit what you will say before hand in completely undemocratic fashion). Gossip before the session was that the leaked doc would be brought up by a few MEPs, but by the looks of things, the issue was buried as those who did want to talk on the matter strangely didn't get called to speak. So I flipped my question at the last minute, took to the floor and brought up the matter of this toxic paper. As far as I'm concerned everyone in the EU, be they citizens or politicians, have a right to know about plans to spend their money being cooked up behind closed doors along the corridors of power.

The leaked document entitled "A reform Agenda for a Global Europe - Reforming the Budget, Changing Europe" proposes “a major refocusing of EU spending priorities, with more emphasis on ... a Global Europe…with less emphasis on agriculture and transfers towards well-off regions”.

The proposals, which suggest reducing funding to the richest states and removing focus from agricultural development, are at odds with the original aims of a European Union, which represented a trading alliance between 's biggest economies. The moves are likely to upset a number of member states across the EU.

And of course, the , one of 's biggest net contributors, will most likely have to give up more of the rebate and sacrifice remunerations currently received. It's for this reason, we, more than anybody else, should get out quick and stop the Eurocrats from sticking their hands further into our coffers.