A Race for Pole Position 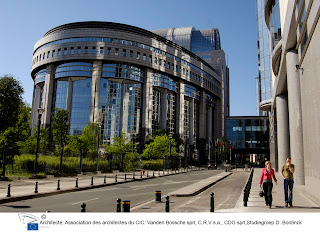 The Formula One Season came to an end a couple of weeks ago. Now the teams have returned to their garages and are working hard behind closed doors to try to gain an advantage over their opponents, defend their secrets and develop their strategies for the future. Which bums are in which seats is a highly contentious topic, as is what the various budgets should be and whether new teams should be allowed to join next year. It's much the same as what's going on in Europe. Temporary close of play came after the Treaty was ratified, but unlike the Formula One this was a far cry from a British success story.

The Formula One season is due to kick off again in March, and coincidentally, this could be the dawn of a new season i

n British and European Politics. If we get an early General Election, of which there has been much talk, who gets in and to what extent is of great interest to the teams themselves and to the overall Governing Body, in this case, Brussels. A poll in The Times suggests the number expecting a Tory overall majority has slipped from 57 to 50 per cent in the past month, the lowest level since the question was first asked in April. By contrast, the number expecting a hung Parliament with no overall majority has risen from 17 to 26 per cent. 65 per cent still expect the Tories to be the largest party, against 27 per cent for Labour. The Tories have suffered slightly from last week’s shift by Mr Cameron on Europe after the final ratification of the Lisbon treaty. Support for other parties has risen by two points to 14 per cent, with the UK Independence Party up from 2.3 to 4.3 per cent. Apart from the two months around June’s Euro elections, this is the highest level since 2005.


What the Times doesn't go on to say is how a hung parliament might be formed, who with and what this would mean for Europe.

Miliband jetted off to Berlin last night. He is clearly trying to get a foot in the door, no matter his protestations to the contrary. The irony is not so much that this slippery character looks set to jump ship before the Labour Party Boat sinks, but the fact that all the great and good of the EU used the anniversary of the fall of the Berlin Wall to discuss who should be their leader. On the same day that the world looks back at the final remnants of the Soviet Bloc being torn down and utters Cameron's shallow promise of "Never Again" the EU Communists are planning the next wave of passive global conquest.
Posted by John Bufton MEP at 16:22:00